Growth In The Pipeline… a Pipe And Control Line Market Outlook

In a globalised market, fragmentation in performance can be expected - in the pipeline and control line sector this is a key theme. Indeed, relative sub-sector performance differs not only by geography and market segment but also by water depth, construction material and environmental conditions . A key example of these dynamics is demonstrated by the differing  levels of market growth expected  by geographical  region.  Indeed, whilst the traditional shallow water markets of the North Sea and the Gulf of Mexico (GoM) are slowly waning, the South East Asian, Brazilian and African  regions  are  becoming  increasingly  buoyant .  However,  the  short-term  cycle  is  also  expected  to  witness substantial growth in the frontier sectors of deepwater Norway, the UK West of Shetland and the Lower Tertiary Trend in the Gulf of Mexico, with the deeper, harsher and more remote waters driving activity in these regions. In this review, Luke Davis and Gregory Brown of Infield Systems report on the current state of the pipe and control line markets and what industry observers can expect for a transitional market cycle. 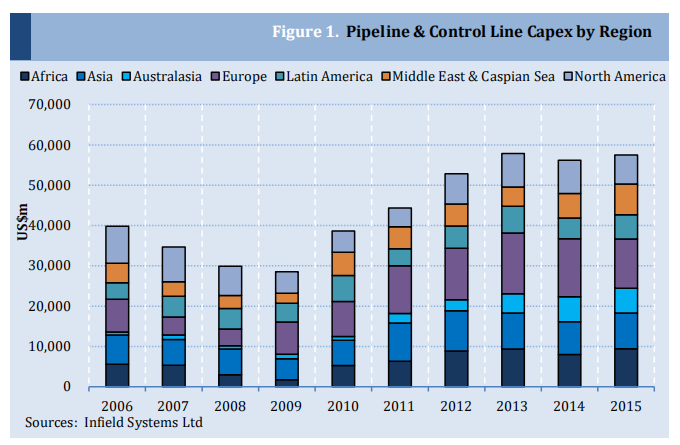 Over the next five years Infield Systems forecasts pipeline and control line expenditure to near the $270bn mark, equating to  nearly 80,000km of lines of which 56,000km will be pipelines and 24,000km will be control lines.  In combination these two sectors are expected to see a high level of growth after a significant downturn between the highs of early  2008  and the  lows of 2009  and  2010.  However, despite this general expectation of growth,  it  is important to note key differences in geographical performance as emerging markets begin to outperform traditional basins of activity.

Whilst capital expenditure in the more mature regions is forecast to rebound in the near term, longer term growth is comparatively  modest when viewed  alongside  some  of the  emerging  markets.    Indeed,  recent  events  in  North America, including the fallout from the financial crisis, the Macondo tragedy and competition from onshore shale gas, have combined to reduce shallow water E&A activity and thus platform and pipeline installations in the region. A similar picture has unfolded in the UK North Sea – though the sluggish market here is driven more by changes in the region’s fiscal regime and difficulties in securing credit – a situation that has been exacerbated by the sovereign debt crisis in the Eurozone.

However, whilst these two traditional shallow regions stagnate, Infield Systems anticipates substantial growth in the emergent markets of  North Western Australia,  East Africa and  parts of Asia (including deepwater activity  in the South China Sea and the offshore Krishna-Godavari basins off India) whilst the deepwater stalwarts of West Africa, the Gulf of Mexico and Brazil should continue to provide significant long-term momentum for the market.

Moving mountains – the growth of trunk-lines

Whilst a trend towards increasingly deep water installations, and hence associated SURF lines, will continue to grip industry  attention,  shallow  water  installations  are  expected  to  maintain  a  significant  market  share  for  the foreseeable  future.   Indeed,  as  much  as  two-thirds  of  capital  spending  is  forecast  to   be  directed  towards developments in less than 500 metres of water over the period to 2015. As such, conventional pipeline installations will constitute a substantial proportion of demand going forwards - a significant portion of which is forecast to be driven by shallow water developments offshore Asia.

Shallow  water  trunk  and  export  lines  will  be  an  integral  constituent  of  the  wider  pipeline  market  over  the forthcoming five year period as this subsector is forecast to display the strongest growth. Activity within this sector has  historically  been  driven  by  pressure  on  national  governments  and  regional  authorities  to  enhance  energy security through the diversification of hydrocarbon supplies. These major pipeline networks are often heavily reliant upon international relations and macroeconomic conditions, and can therefore be disproportionally subjected to delays and reassessments in comparison to any other sector of the market.

Europe  holds the  largest share  of the  offshore export  and trunk  line  market segment with 42%  of total global installed kilometres and a forecasted 38% of capital spending towards 2015. With several high profile and complex projects in the planning and construction phases, most notably Nord Stream, European trunk and export line capital expenditure is forecast to reach some US$21,000m over the 2011-2015 timeframe.

First announced in 2001, the Nord Stream project links Vyborg in Russia to Greifswald in Germany. The line is the longest subsea pipeline in the world at 1,224km in length. The Nord Stream project has involved a complex array of contractors including Royal Boskalis Westminster, Tideway, Sumitomo, Saipem, Allseas, Technip and Snamprogetti amongst others working for a consortium that includes Gazprom, GDF Suez, Wintershall, Gasunie and E.ON Ruhrgas. In November 2011 it was announced by the consortium that the first of two lines was connected to the European gas grid. On completion, the giant twin pipeline project is expected to supply the energy hungry European market with 55 BCM of gas (equating to some 18% of 2010 northwest European consumption) per year over the next 50 years. Nord Stream aside, investment in the trunk and export line market is also expected to increase considerably across Asia, rising from US$4,000m in the historical 2006-2010 period to nearly US$6,800m going forwards to 2015. Trunk and export lines in the region are indicative of the expected growth in energy demand across Asia. 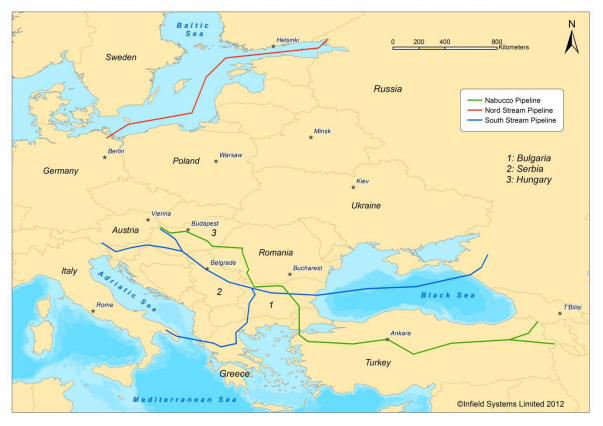 Nord  Stream  encapsulates  the  logistical,  political  and  engineering  complexities  associated  with  large  trunk-line developments.  Indeed,  beyond the technical  difficulties associated with engineering two  1,224km  pipelines, the development consortium was tasked with managing the political implications of running a line through the territorial waters of  Russia,  Finland, Sweden,  Denmark and Germany in addition to satisfying the demands of the affected states of Latvia, Lithuania, Estonia and Poland. It took nearly nine years for the project to gain consent and when it was finally received in February 2010, work began swiftly in April the same year. Nord Stream pipelay is due for completion in Q3 2012 with the commissioning of the second line bringing an end to one of the more enduring stories in the development of export infrastructure. The Trans ASEAN pipeline is a possible trunk line project that would run through Asia and thus extend the substantial hydrocarbon supplies of South East Asia to less resource rich areas.

Whilst this high level of activity is encouraging it is not a sustainable long term trend - rather it is indicative of this particular cycle in the market. Beyond the near-term growth in Eastern European activity Infield Systems notes little demand post 2018 as these developments are very much one off projects and once they are in place Infield Systems sees future activity being driven by tie-in lines rather than additional major export lines.

Driven by floating production and subsea technologies the global deepwater market is probably the fastest growing sector of the offshore oil and gas industry. Indeed, with many onshore and shallow water regions facing production decline and  NOCs in control of prolific  resource-rich  regions such as the  Middle  East, operators are  increasingly seeking to  explore  and  develop  reserves  in frontier  regions. This  is  occurring  not  only  in the three  deepwater “heavyweight” regions – the GoM, West Africa and Brazil – but also in Asia, Australasia and Europe as well.

For the SURF market such a clear and distinct trend towards increasingly deepwater E&P activity should translate in to considerable market growth over the following decade and  beyond.  Indeed,  Infield Systems’ forecasts  robust growth in 2012 as  IOCs continue to develop their extensive deepwater reserves in West Africa and the  US GoM whilst Petrobras presses ahead with its development of Brazil’s pre-salt reserves.

As Figure 3 demonstrates below, there is a polarisation in market performance between the shallow and deepwater SURF markets. Indeed, whilst the shallow water market is expected to display moderate growth in the near term – the longer term trend is not so positive. However, in the deeper waters, activity is far more robust as total capital outlay is expected to increase by as much as 56% between the 2006-2010 and 2011-2015 timeframes.

Whilst deepwater developments have undoubtedly been the major growth engine for the SURF market over the last decade the continued development of remote oil and gas fields will provide further fuel to the fire . In particular, long-distance subsea tiebacks are becoming an increasingly common field development scenario as R&D work by operators and their contractors starts to  make these technically challenging  projects  more feasible.  Recent  high profile projects include Statoil and Shell’s Ormen Lange development offshore Norway and Total’s Laggan project offshore  UK  in the  West  of  Shetland  region . The  former  is  the  world’s  longest  subsea-to-shore tieback  that  is currently producing whilst the latter will break that record and open up the Atlantic margin to further E&P activity once commissioned in 2014. 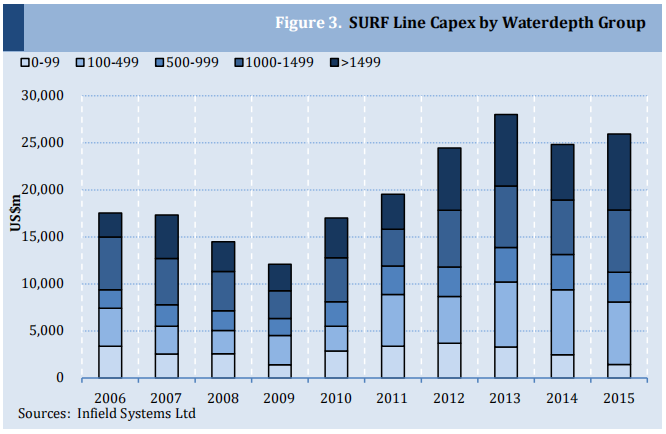 Another key example of this trend lies in the development of the deepwater Jansz field offshore Australia. Jansz is part of the Greater Gorgon project, which according to Chevron will be the largest resource project in Australia’s history. The  project  involves the development of several fields,  including Gorgon and Jansz, which  in total  have estimated reserves of 40 Tcf. The estimated project value is US$43bn, and first production of LNG is expected in 2014. The Greater Gorgon area is located between 130km and 200km off the coast of North West Australia . The fields will be connected by a 70 km, 38 inch subsea pipeline and a 180km 38 inch subsea pipeline to an LNG facility on Barrow Island . From Barrow Island a 90 km pipeline will connect the facility to the Australian mainland .

Whilst SURF developments such as those in the more challenging parts of the North Sea, Brazil, West Africa, the GoM, Asia and North West Australia are driving the market today, encouraging E&A results in East Africa should provide additional growth further down the line. Indeed, recent exploration successes such as those at Windjammer, Barquentine and Lagosta have driven discovered volumes beyond the threshold (10 Tcf) for an LNG facility .  East Africa and  Mozambique  in  particular,  is  now  being touted as the Australia of tomorrow. Anadarko, operator at Windjammer, Barquentine and Lagosta plans to develop these reserves via an offshore tie-back to an onshore LNG facility. It has now been joined by Eni’s discovery at Mamba South making a possible 22.5 Tcf project probable by the end of the decade.

A pipeline of opportunities

Growth in the pipeline, control line and indeed, the wider offshore market in the forthcoming cycle is likely to be characterised by ever deeper, harsher and more remote projects. IOC, NOC and independent participation is likely to create a fertile contracting market for both the major contractors and their indigenous counterparts. Such a buoyant level of activity is likely to place significant strain upon the supply chain in the long term as the investment appetite from operators has outmatched the liquidity of debt required to invest in the fundamentals of supply: fabrication plants, installation vessels and perhaps most crucially, pipeline engineers.

Whilst the overall theme of growth is a positive indicator towards future revenue generation, such a view must be tempered by the fear of a supply chain with insufficient capacity to manage such an increase. It is Infield Systems belief that beyond access to credit, political instability and the impending re-write of health and safety legislation, the most prominent threat to the overall growth in the market is the lack of skilled engineers in the workforce .

Industry stakeholders should be aware that despite a compelling growth story, any future activity in the pipe and control line markets is dependent upon a supply chain of sufficient size and capability so as to support the range of projects planned by a variety of operators. Despite these fears the market sits on the edge of a particularly exciting cycle. As industry observers Infield Systems will watch carefully over the coming months in anticipation of a significant market recovery from the lows of 2009 and 2010.